Located in Upper Assam on the banks of the Brahmaputra River, Dibrugarh is the second largest city of Assam after Guwahati. Dibrugarh shares its boundaries with cities like Tinsukia, Sibsagar and Dhemaji on the north, south and eastern sides along with the state of Arunachal Pradesh.  Well known as the “Tea City of India”, Dibrugarh is known for the production and possession of tea. Oil is another major industry here. Dibrugarh is a rapidly growing city in Assam and is gradually emerging as the industrial and communication hub in the Northeast. The city has a proper tansport system and a number of tourist places to bound tourists to this beautiful city. Let us discover more about the Dibrugarh city.

Origin and History of Dibrugarh

There are several connotations regarding the meaning of the name of Dibrugarh. Some historians believe that the name Dibrugarh has been derived from Dibarumukh, an encampment of Ahoms during the Ahom Sutiya War while some others think that the name Dibrugarh comes from “Dibru” coming after the Dibaru river or from the Dimasa word "Dibru" and “garh” where “Dibru” means a blister and "Garh" means fort.

During the times of the British rule in Assam Dibrugarh served as an administrative and commercial center in Upper Assam. Initially a part of Tinsukia district, Dibrugarh became a full fledged district with headquarters in Dibrugarh in 1971. Presently Dibrugarh is a developed city in Assam. The population of the Dibrugarh district according to 2011 India census is 154,019 with male population being 54% and female 46%. The Dibrugarh city experiences a pleasant and favorable climate throughout the year. The temperature during summers goes to 30 degrees Celsius and in winters it comes down up to 8 degrees. The best time to visit this city is from August to March. 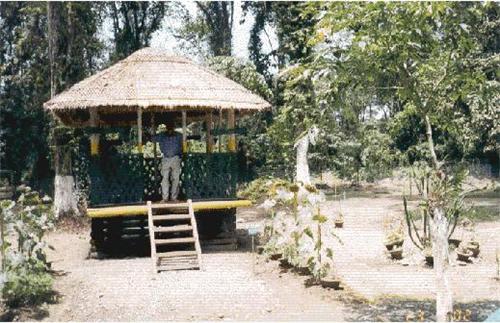 Dibrugarh city has several tourist places including wildlife sanctuaries, historical places, religious places and beautiful tea estates to entertain tourists here. Tourists would be enchanted to visit the famous tourist places in Dibrugarh like Jokai Botanical Garden, Dibru- Saikhowa National Park, Joypur Rainforest, Rukmini Island and Koli Aai Thaan among others. There are also sprawling numbers of tea gardens in Dibrugarh and the smell and sight of the tea gardens in Dibrugarh is bound to take the tourists to another state of mind.

Dibrugarh is a fast developing city in Assam and hence the city has seen huge growth of shopping malls and shopping complexes like Vishal Mega Mart, Khushee Mega Mart and Junction Mall among others. Also there are many local markets in Dibrugarh where one will get stuffs not to be got in malls and shopping complexes. You can have the best of times in shopping in the local markets in Dibrugarh shopping stuffs like Mekhela chador, Assam Silk sarees, gamosa, xorai and japi and some exquisite cane and bamboo products.

Dibrugarh has a number of hotels and restaurants in Dibrugarh like Nataraj Hotel, Hotel Rajawas, Hotel Devika, Hotel City Regency and Hotel East End among others where you can have nice time with family and friends.

Dibrugarh has a well connected transport system in the form of airways, railways and roadways. Mohanbari Airport or Dibrugarh airport is located around 15 kms from the city and is well connected to cities like Delhi, Kolkata and Chennai by airline services. Dibrugarh also has a proper Railway communication where train facilities are available to Delhi, Kolkata, Bangalore and Chennai among others. In roadways NH-37 connects Dibrugarh with the rest of the country. Government managed ASTC buses and private vehicle are available to commute between Dibrugarh and the nearby towns and cities.