Location and area of Dibrugarh 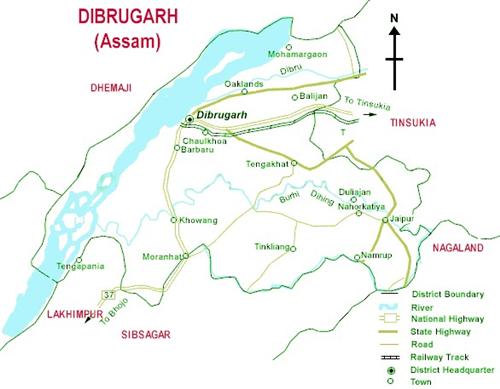 Dibrugarh district is located in the north eastern corner of the upper Brahmaputra valley. To the north of Dibrugarh lies the Dhemaji and Lakhimpur districts, to the south lies and Arunachal Pradesh, the Tinsukia district in the East and Sivasagar district lies to the west.

The Brahmaputra River lies on the northern margin of the Dibrugarh district. The Brahmaputra here is very wide and braided. The river is 10 km wide near the Dibrugarh city. The Dihing or Buridihing River, one of the largest tributary of the Brahmaputra River, flows here. Originating in the eastern Himalayas in the Patkai Mountain range the river flows through Arunachal Pradesh and then through Dibrugarh before finally merging into the Brahmaputra in Dihingmukh. The Dihing River is an important river of Dibrugarh as it provides a unique landscape of bamboo orchards, tea gardens and wet paddy fields, Joy-Dihing Rainforest and adds to the scenic beauty of Dibrugarh. Burhidihing is a source of livelihood for people living along the banks. Towns like Digboi, Duliajan, Naharkatiya Margherita and Ledo are situated along the banks of Dihing River. Plains of the Dihing River are a rich heritage of flora and fauna.

Climate and Weather of Dibrugarh

The climate of Dibrugarh is humid sub tropical climate. The weather is marked by extremely wet summers and relatively dry winters. The average annual temperature in Dibrugarh is 23.9 C. Summer season in Dibrugarh is marked by high humidity. Winter starts from December and lasts till February here. The minimum temperature during this time of the year ranges between 8 C and 10 C while the maximum stays between 27 C and 29 C. The monsoon months start from April and lasts till September. Monsoon is accompanied by heavy rainfall. . The average annual rainfall of Dibrugarh is 276 cm.

The Dibrugarh district is one of the richest districts of Assam as regards to mineral resources. The primary mineral resources of the district are petroleum, coal and natural gas. The Dibrugarh district also has thick forest area. There are both reserved and unreserved forests in the district.  Trees like hollong, nahar, mekai, ajar, sam, poma and bamboos are found in the forest areas.